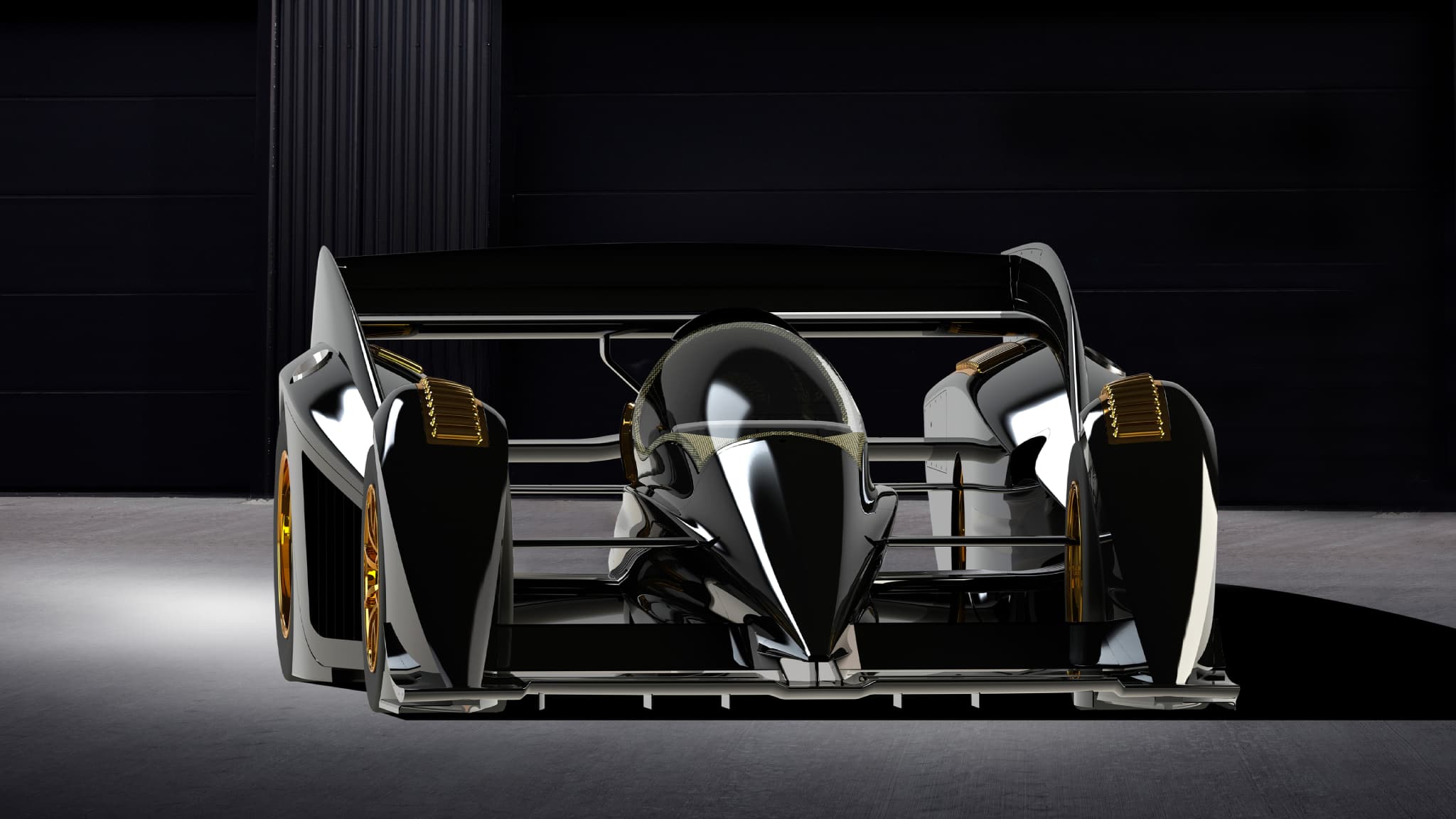 A RUNNING FZERO PROTOTYPE BY CHRISTMAS

RODIN CARS WILL HAVE A RUNNING FZERO PROTOTYPE BY CHRISTMAS

To do it, founder David Dicker hired more engineers, is building new facilities and is sponsoring F1 hopeful Jamie Chadwick.

The objective is simple: build a single-seater track car that will lap a race track faster than a current Formula 1 race car. Executing such an objective, however, is as mighty as you get in the automotive world. But Australian billionaire, David Dicker, is taking it on and already built an entire company around it in New Zealand, Rodin Cars. Under that banner, he’s developing his F1-beating project, the FZero.

We went to New Zealand last fall to sample the company’s first project, the FZed, and left impressed with Dicker’s engineering prowess, attention to detail and resolve to realize his dream. Since our last encounter, Dicker hired more engineers, found a new engine developer and sponsored Jamie Chadwick, the British racing driver that won the inaugural W Series Championship in 2019, in exchange for her development help on both the FZed and FZero.

To learn more, we caught up with Dicker and got a status update on Rodin Cars and FZero.

Autoweek: Why did you decide to support Jamie Chadwick in her burgeoning racing career? To you, is it a small price to pay to get her development help at Rodin?

David Dicker: I wouldn’t say it’s a small price. It’s expensive running in these (Formula 1 development) series. But it’s good to get behind someone who’s good and deserves to get some help. And she’s good!

AW: How involved is Jamie Chadwick going to be in FZero development and how often?

DD: To be honest, I’d really like to have her down here for a coming Avon tire test, but (because of the pandemic) I’ll have to do it or get someone else. And, frankly, that won’t be as good. And she’s done such a good job in the car, I was so happy. But with the way flights are, I’m not sure when we can get her down here.

But on her FZero development, our plan is I’ll do the initial shake down here. I’ll get her in the car as soon as I feel it’s working correctly, because she’ll be able to extract the full level of performance. We know what target lap time we need here (at the Rodin test track) to get the time we need in Sepang (to beat an F1 car at the Malaysian F1 circuit). We have to lap the FZero around our track in under 40 seconds. And I’m pretty confident, the FZed is already in the 45s. We only need another 5-6 seconds and the FZero should be vastly quicker.

AW: How is the FZero progressing?

DD: It’s going well, but, like all things, it’s taking longer than I want. We hired a few more engineers, which is helping a lot. It’s all progressing well, but there’s still quite a lot to do. We’ve also decided to change the original seat set up to more closely match the FZed, as well as a few other changes, which requires a new mold for the mono(coque). We expect that to come in a week or two.

We’re also making good progress on our transmission. But we did run into an issue with our V10. Our original engine guy was more or less retired when he started our project and it proved a bit too much for him. We handed it over to a United Kingdom race engine builder, Neil Brown (Neil Brown Engineering). They’re redesigning it. We hope to have running prototypes by Christmas.

Long-term, we’re going to bring all the engine manufacturing in-house. Neil Brown is going to make five engines for us, to get us started. But we’re building a new facility and will do the whole thing: castings, crank(shaft)s, (connecting)rods, pistons, pins, everything. 3-D Systems has a new method of printing casting cores. And we found a company in Italy that has a lot of experience casting titanium gearbox cases for Formula 1, and they’ll build us a vacuum caster for very high-quality castings.

And we’re getting a DLC machine (which is a highly precise CNC machine) from a company in Colorado that way, we can either DLC or PVD (physical vapor disposition) the castings for a better finish. And we’ll DLC all the internal sliding components, and we’re getting a machine in Korea to produce the crank(shafts), so we’ll do the whole thing in-house.

DD: It’s a 4.0-liter V10 with a 72-degree angle V configuration, which is good because that makes it about two-inches narrower, side to side, than the Cosworth V8 (run in the FZed), which helps a lot for packaging.

AW: And the FZed will eventually get that V10 as you’ve said before, but in the meantime, you’ll continue running the Cosworth in the FZed?

DD: Yes, we have an inventory, but as soon as we run out of Cosworth V8s we’ll switch over to the V10s in the FZed as well.

AW: How close are you to a working test mule for the FZero?

DD: The engine is going to be the thing that will take the longest, but leaving that aside, we should have the rolling chassis by Christmas, at the latest. And we won’t put the Cosworth V8 in it, rather we’ll wait for our engine to get finished because the installation is quite different. The Cosworth is too wide, and then there’s all the issues with the gearbox.

And gearbox development is going well. The case is printed titanium. We’re still waiting for 3-D Systems to supply us with a (3-D) printer that’s big enough, but they’ve been making prototype parts for us on a development printer they have in Belgium and they just about finished the first set of cases for the gearbox, so we should have them soon to inspect and clean-up and then send to Ricardo to machine. And they should be able to assemble the gearbox from there. It shouldn’t be too long and it should be really good. Because it’s completely purposely designed, entirely for this application.

AW: Any continued development on the FZed?

DD: We continue to develop the FZed. Jamie (Chadwick) came out and gave us good feedback in a few areas. And other detail work. It doesn’t necessarily improve the performance but makes the car nicer. That kind of work always takes a long time.

AW: What do you mean by nicer? Easier to drive? More comfortable?

DD: Nicer to look at. We replaced all the brackets with (3-D) printed titanium brackets, which look nicer. We also made this device to improve the fuel system. Before, two AN6 hoses were just cable tied together. It worked. But it was a bit crap to look at, so we made this manifold that bolted to the bulk head; looks much better. We also re-made all the water pipes, mostly in titanium with a Wiggins clamshell clamp, changing from mostly rubber hoses and a clamp. It’s just nicer.

And we’re getting experimental tires coming from Avon soon. The tires we’re currently using aren’t bad, but they’re harder than what we want for the car.

DD: Oh yeah. Nothing affects that car more, once the car is built, than the tires.

AW: And is it true that the steering wheel was updated again?

DD: Yes. We changed the shape of the wheel, Jamie (Chadwick) didn’t like the shape we had. I didn’t see a problem with it. But we designed a different shape and, to be honest, it does feel better. It’s a minor adjustment to the handgrip and now it folds into your hand better.

AW: One of the details that impressed me with the FZed was the amount of time you put into the pedals. I didn’t think it would make a difference. But in practice, that translated to a faster and more complete build in confidence in driving the car because you eliminated any fears of your feet slipping. And details like steering grip, and others you mention, do add up to more performance because they increase driver confidence.

DD: They’re fiddly and most guys brush it off and say, ‘I can drive around it,’ but that’s a stupid way to look at it. You can be sure the F1 guys fiddle around with this stuff to an incredible degree because it makes a difference. It makes the car work better. To drive quick, you, sort of, have to become one with the car. And that only happens if everything works the way you like it.

I’ve just got a (McLaren) Senna GTR and there’s pedals down there, they work OK, but there’s no real support for your feet. They just seem to be areas that people don’t care about and I don’t know why because, obviously, they’re important.